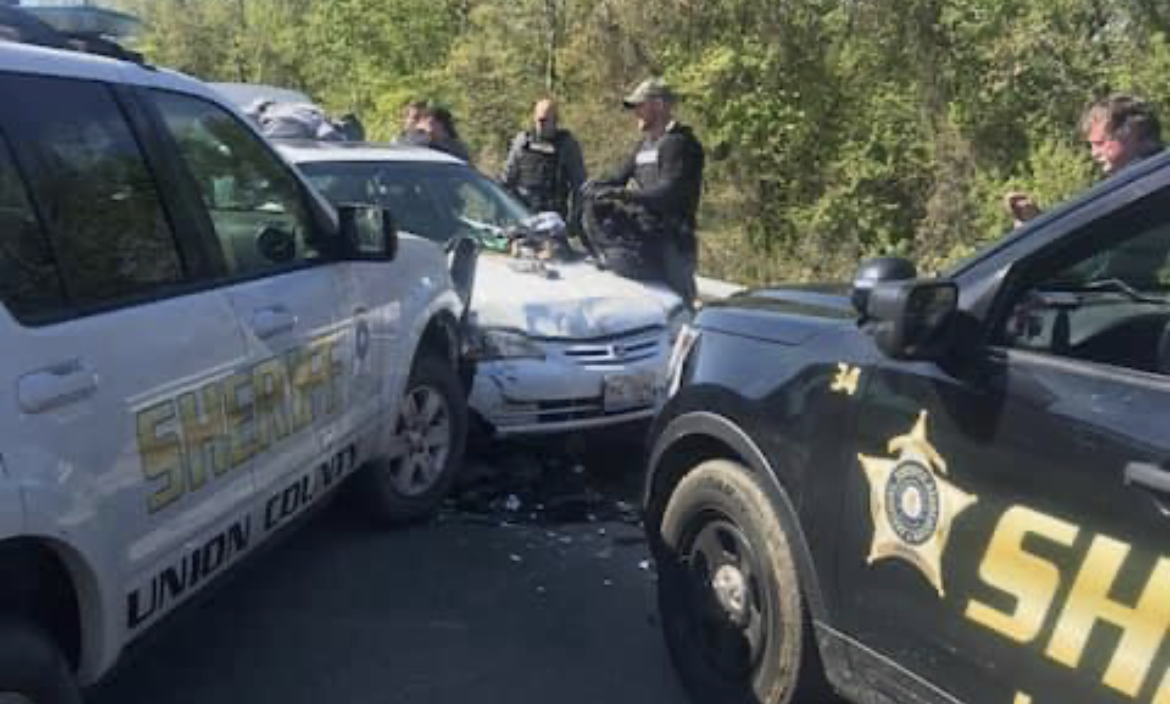 Union County, Ky 4/22/21- Just after 3:30PM Thursday afternoon the Union County Sheriff’s Office along with the Sturgis Police Department responded to the Shawneetown Bridge on Ky 56 W to head off a vehicle pursuit, heading for the state line initiated, in southern Illinois. Multiple Illinois authorities were in pursuit of a white 2002 Honda Accord which allegedly endangered a nearby school in their area.

According to the report, the Union County Sheriff and another Deputy set up spike strips at the Shawneetown Bridge on Ky 56 West but as traffic bottled up on the bridge, the pursued vehicle became more erratic. This prompted Union County Sheriff Mickey Arnold to advance forward, blocking the eastbound lanes. Once Arnold moved into place, the pursued vehicle revved his engine, intentionally ramming the Sheriff’s vehicle head-on thereby ending the pursuit.

Once the pursuit came to a stop, the subject inside the vehicle would not follow commands to exit the vehicle. The suspect continued to move around inside the vehicle and then deputies say he jumped to the back seat. This prompted other deputies on scene to knock out the driver’s side window and deploy a taser which was ineffective. After additional taser deployments, the suspect became incapacitated long enough for police to remove him from the vehicle and place him in custody.

An ambulance arrived on scene to transport the suspect to Deaconess Union County for medical evaluation.

Chad D. Pennell (38) of Elizabethtown Illinois was arrested by the Union County Sheriff’s Office and charged with the following:

The Union County Sheriffs Office says Pennell is expected to have additional felony offenses in Illinois as well.

“The Union County Sheriff’s Office would like to thank the Sturgis Police Dept as well as all Illinois agencies involved for their professionalism in bringing this incident to a safe close for residents of both Illinois and Kentucky.”