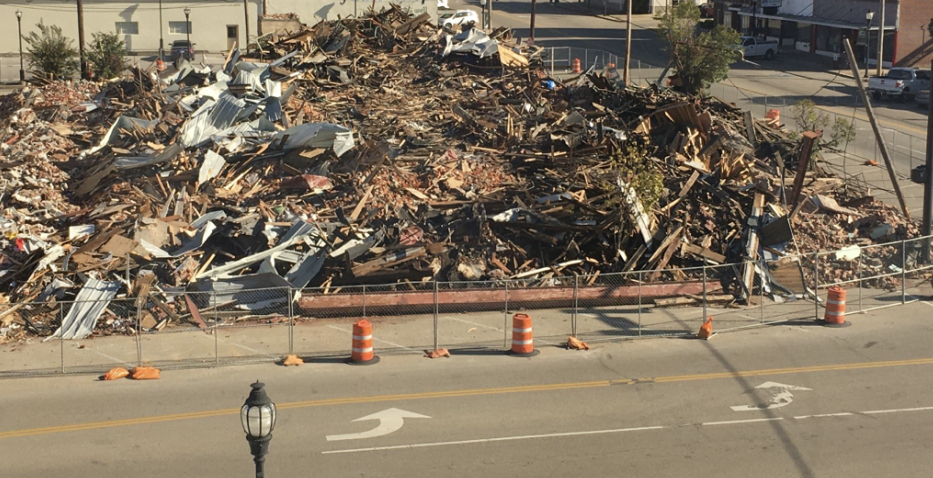 UPDATE::: HENDERSON, KY 02/04/21– A contract has been signed for debris removal and the City of Henderson Codes Department has started the necessary advance work for the clean-up of the property located in downtown Henderson at 239 First St. The building partially collapsed on the evening of Aug. 21 and onto an adjoining building, and both were razed the following day.

After going through a review and appeals process, the Code Enforcement Board ruled on Jan. 28 that clean-up work would need to begin in seven days and be completed in 30 days.

As of this week:

–Permits have been obtained from the Kentucky Department of Air Quality, which has ultimate oversight and final jurisdiction about the location for disposal of materials and the method by which is must be done.

–City utilities – gas, electric and water – have been performing their checks of the site.

–Codes Administrator Ray Nix has met with representatives for contractor M. Bowling Inc. (MBI) to map out logistics for removing the debris, coordinate problems areas and communicate with neighboring business owners and property owners about the work and timeline.

–The contractor is awaiting delivery of the required special liners for trucks that will be used to haul off debris. Nix said that even though the liners haven’t yet arrived, MBI still feels confident that the work can be completed in the  allowed number of days.

HENDERSON, KY, 01/28/21– The Code Enforcement Board for the City of Henderson ruled during a special-called meeting on Thursday, Jan. 28, that the clean-up for the property located in downtown Henderson at 239 First St. must begin in seven days and be completed in 35 calendar days.

The special-called meeting was a follow-up hearing to review what has transpired since Dec. 28. In December the board granted approval to a plan that started the clock running on Dec. 28 allowing 30 days to get the clean-up procedure finalized. Meanwhile, the Codes Department was directed to assess a $200 per work day codes violation fine starting Dec. 28.

The property owners, Audubon Loans LLC, received a citation in early December 2020 from the city Codes Department regarding the unsafe condition of the property and contested it on Dec. 18 before the board.

At that December meeting, the board heard testimony that the owners had appealed a ruling from the state of Kentucky Division of Air about where the debris from the building would need to be disposed of. The appeal and subsequent independent testing of the site for hazardous materials slowed the clean-up process.

The Kentucky Division of Air has final jurisdiction about the location for disposal of materials and the method by which it should be done.

At the most recent meeting, the board also voted to review the code violation citation penalties that the property owners have been amassing since Dec. 28 once the property is cleaned up to determine whether they might be waived based on good-faith efforts to get the job completed.

The board also approved the City’s request that the citation penalty increase to $750 per day if the clean-up should surpass the 35-day timeframe.

The building partially collapsed on the evening of Aug. 21 and onto an adjoining building, and both were razed the following day.