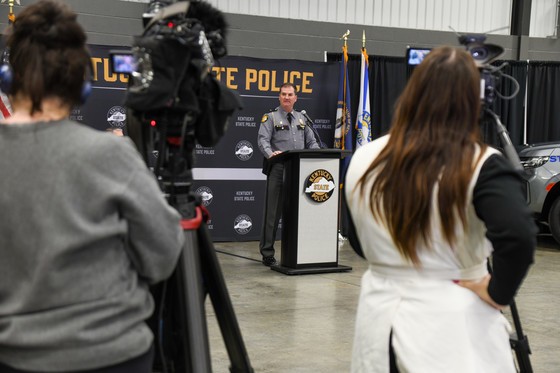 Frankfort, KY 1/20/2023 – For the first time in the commonwealth’s history, the Kentucky State Police (KSP) will be equipped with body-worn cameras to increase officer safety and public trust. On Friday, at the training academy, KSP demonstrated the new integrated video recording system, which will be distributed to approximately 780 sworn personnel.

“Public safety is fundamental to creating a better Kentucky for all of those who choose to call the commonwealth their home. These devices demonstrate to the public that reviews of law enforcement activity will be thorough and transparent, thereby strengthening public trust in law enforcement,” Justice and Public Safety Cabinet Secretary Kerry Harvey said.

In November 2021, Governor Andy Beshear first announced his plans for a historic investment to improve public safety, which included $12.2 million for KSP to purchase an integrated video recording system. In April 2022, the Governor signed legislation that funded the recording system.

“These recording devices will provide protection to our troopers and officers by documenting exactly what happens during a situation,” Gov. Andy Beshear said. “KSP is committed to being the best and to doing things right. I commend them for their transparency.”

“When the Governor’s budget allocated funds for an integrated video system, we realized the need to carefully test and evaluate the best equipment for us,” said KSP Commissioner Phillip Burnett Jr. “KSP plans to deploy the Motorola system in all cruisers by the end of 2023, beginning with newly issued cruisers first. Troopers assigned to those cruisers will receive the corresponding body worn cameras at that time.”

Documenting trooper interactions in the field allows KSP leadership to investigate grievances against officers and can be used in refining techniques taught to cadets at the KSP academy.

“With the integrated video system, supervisors in the field can better examine these instances when complaints are made,” said Lt. Col. Mike Rogers, KSP Director of Operations.

KSP will hire 28 civilian employees to assist in documentation, system maintenance and archival of video footage captured through the integrated video recording system.

The Beshear-Coleman administration’s top priority is the safety of all Kentuckians. The Governor’s public safety actions are creating safer communities and a better Kentucky now and into the future.

In October, the administration took another step forward in creating safer communities by awarding more than $350,000 in grant funding to prevent youth crime across the commonwealth.

In June, Gov. Beshear announced the Military to Law Enforcement Program (M-2-LE). M-2-LE allows local law enforcement agencies in Kentucky to hire active service members within all U.S. military branches during their last 180 days of service. Upon being contracted by a law enforcement agency, the military member will continue to receive their pay and benefits from the U.S. Military while they undergo law enforcement training at the Department of Criminal Justice Training.

In April, the Governor signed legislation he championed the previous year that funds a $15,000 raise for all troopers and a starting pay increase for sworn officers from $37,887 to $55,888 annually.

The Governor has also supported legislative action like Senate Bill 64 and House Bill 254, making it easier for law enforcement to conduct undercover stings and increase the chances of stopping a horrific crime against a child from being facilitated through the internet. These actions will also give law enforcement officers the authority to charge offenders with harsher crimes to keep them away from the public, preventing further interactions with Kentucky’s most vulnerable population.

Since taking office, Gov. Beshear has awarded almost $8 million in grant funding to assist state and local law enforcement agencies in purchasing the tools and resources that will not only allow them to protect Kentucky communities but will also ensure their safety as they stand on the front lines every day. Recently, the administration announced nearly $2 million in grant funding to enhance public safety, curb the sale of illegal drugs and fight addiction.