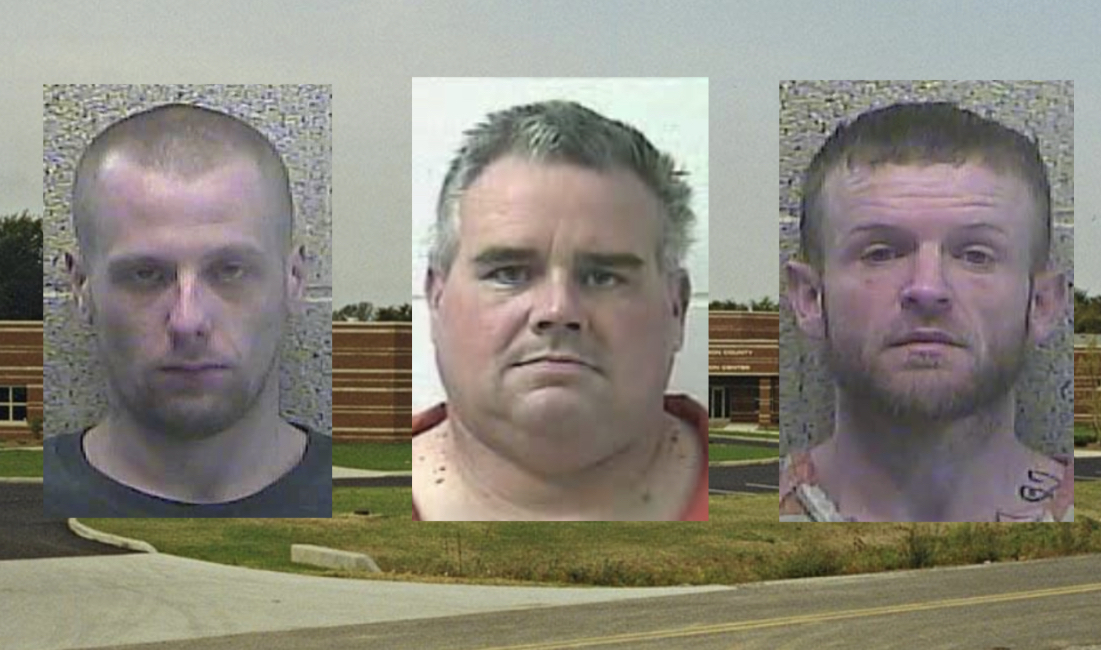 Henderson, KY 7/6/21- Last Tuesday the Pennyrile Narcotics Task Force (PNTF) and Henderson County Detention Center Investigators made arrests in an internal ‘Drug Contraband Investigation’ after intercepting a package containing approximately 10 grams of Crystal Methamphetamine and approximately 113 grams of Tobacco that was brought into the jail by a jail employee.

During the investigation, detectives learned that a Deputy Jailer named Jason Evans, 47 of Evansville, was approached by inmate Colby A. Pruitt, 30 of Henderson, asking the deputy if he was interested in making some extra money. After the conversation with the inmate, Deputy Evans allegedly agreed and was given a phone number written down and was asked to call his “Guy”.

According to detectives, Deputy Evans made the call and agreed to receive a package of tobacco and would be paid $200.00 if he delivered the package to the inmate inside the jail. The deputy received the package and $100.00 from their “GUY” agreeing to deliver to the jail.

After intercepting the wrapped package of loose tobacco, investigators located a plastic bag containing approximately 10 grams of meth inside the tobacco. Upon further investigation and interviews, investigators discovered the deputy was supposed to deliver the package and place it in a restroom inside the RCC Unit where the inmate would retrieve the package of contraband.

Detectives and Jail Investigators set up a monitored and controlled delivery of the contraband Tuesday afternoon. Detectives observed the deputy jailer deliver the package in the restroom and a couple minutes later when the deputy exited the room Pruitt was seen briefly speaking with the deputy and then enter the stall where the package was dropped. Jail personnel entered the restroom area and located the inmate Colby Pruitt who was then detained and questioned. Pruitt briefly resisted and was placed in cuffs. During that time, he attempted to move his leg which caused the package (contraband) to drop out from his pants leg onto the floor.

Through more interviews and video phone calls, investigating detectives learned that jail inmate Charles Stewart, 32 of Henderson, had set up the scam through a subject outside of the jail and with the floor worker (Pruitt) to engage the jail employee to bring in and deliver the contraband for cash.

Deputy Jailer Jason A. Evans, Charles A. Stewart, and Colby A. Pruitt were all arrested and charged for:

Stewart and Pruitt were both additionally charged for:

All three subjects were placed in isolation on their charges for processing without incident under a No Bond.

According to the release, this contraband investigation is still on-going with additional inmates and suspected jail employees being involved. Those involved could be facing additional charges and other arrests forth coming.

PNTF Detective Bill Mills says Henderson County Jailer Amy Brady and her staff were deeply involved in working with detectives with the Pennyrile Narcotics Task Force who were also assisted by the Henderson County Sheriff’s Office.