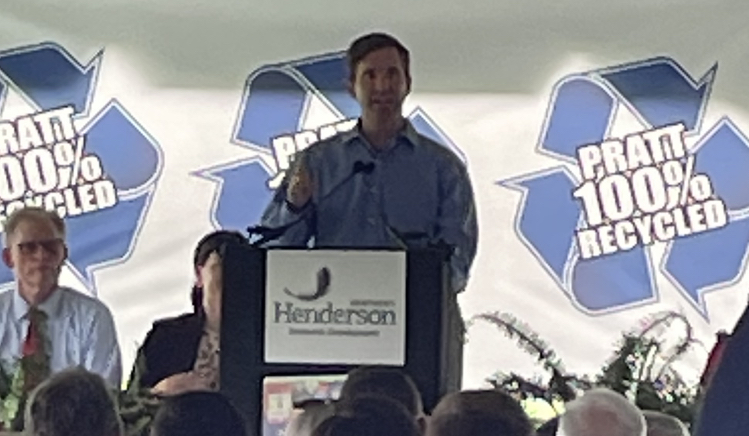 Henderson, KY 7/29/21- Officials with the Kentucky Governors Office, Henderson Economic Development and several other local representatives made a major announcement Thursday afternoon. Numerous state and local officials gathered just off Bypass 425 in Henderson at the old Bypass Golf for the major announcement.

“This is the LARGEST jobs and economic development announcement in western Kentucky in the last 25 years.”

Kentucky Governor Andy Beshear announced Thursday that Pratt Paper LLC. would be building a new paper mill in Henderson, Kentucky. With lots of excitement, Gov. Beshear said the $400 million investment will bring around 320 new, good-paying manufacturing jobs to the area, paying $39 an hour, including benefits

Gov. Beshear announced the construction of the first 400,000 Sq Ft state of the art facility is expected to begin as phase 1 in March 2022 with a completion date in the fall of 2023. Phase 2 on a second 700,000 Sq Ft facility is scheduled to be complete by 2026 which will be a corrugated box factory.

Lieutenant Governor Jacqueline Coleman spoke after Gov Beshear saying, “Today we are marking the beginning of something very special with a Governor with experience.”

Anthony Pratt, Executive Chairman of Pratt Industries in America, is an Australian businessman and billionaire of the world’s largest privately owned packaging and paper company. Pratt, speaking from a zoom style platform, announced that this investment is the 71st factory in America and this particular factory will produce 1,500 tons of recycled paper every single day in Henderson.

“Collaboration is our nature. We live by that motto here in Henderson, because we firmly believe that we can get 10X more done with our partners than we can trying to do things alone.”

Missy Vanderpool, the Executive Director of Henderson Economic Development, ended the announcements giving thanks to all the local Henderson associates that have helped along the way to make this happen and bring this new development to Henderson County.

“We (Henderson Economic Development) have a lean organization with dedicated Board of Directors and we could not have made this happen without their support and hard work.” Vanderpool said, “One thing I have learned through all of this is that it takes a team. A team all pulling together in the same direction.”

“On behalf of all County Government here in Henderson County, we would like to say how proud and excited we are to have played a role in helping bring the project to the finish line,” Judge Executive Brad Schnieder says, “It was a team effort, I think all of Henderson County, the City of Henderson, and residents should be proud of the way that we all worked together to bring this home!”

The Henderson Fire Department along with Deaconess Henderson EMS were also in attendance for the announcement as well as being on standby for any medical issues that may have occurred as temperatures were high with little wind blowing. Henderson Economic Development board members were passing out bottles of water to attendees.