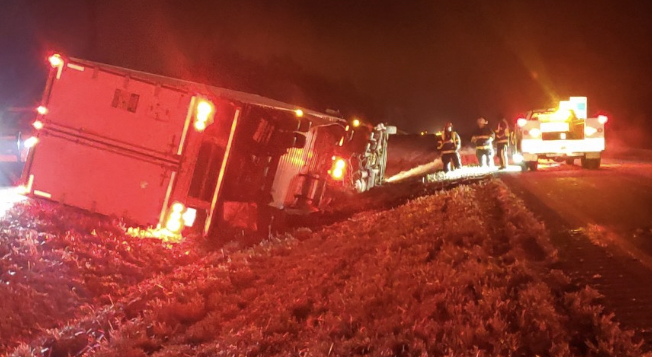 Henderson, Ky 02/11/21– Freezing rain caused quite a few problems overnight in Henderson County. Several transformers blowing, catching fire, and shutting off electricity to hundreds of homes. Ice weighing on trees causing branches to break and fall on powerlines and of course Henderson emergency responders had their share of wrecks.

Around 9:30 Wednesday night Robards Fire Department and Henderson City-County Rescue Squad were dispatched with Henderson Sheriffs Office and Deaconess EMS to an overturned semi on I-69 near the 137 mile marker. Webster County Deputies were called to the scene also as the wreck was on the Henderson-Webster County line.

Officials say the truck was hauling fresh produce and only a small amount of diesel leaked from the fuel tanks. The driver was checked out on scene but refused transport.