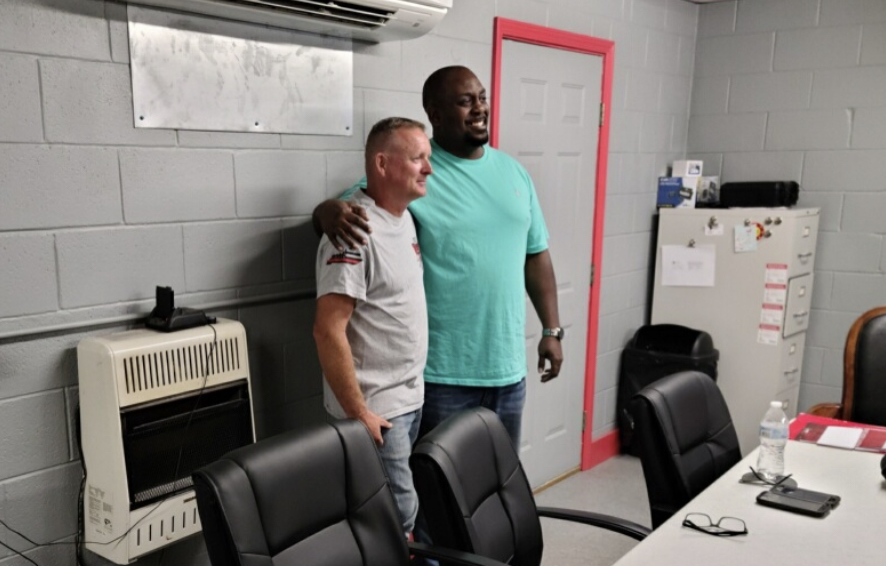 Henderson, KY 7/7/21- Multiple Henderson County emergency response agencies responded to an accident with injuries on Monday just after 12:30PM involving a motorcycle that had collided with a guardrail. The accident occurred on US 60 East near Williams Keene Road in Reed. Emergency responders with the Reed Fire Department, Spottsville Fire Department, and Baskett Fire Departments along with members from the Henderson City-County Rescue Squad, Deaconess Henderson EMS, and the Henderson Sheriff’s Office were all called into action in an attempt to save one man’s life.

Reed Fire Department arrived on scene to find one man, identified by deputies as Troy White of Evansville, laying on the ground suffering from what could have potentially been life-threatening injuries. Bystanders say emergency responders were very professional and worked quickly to treat White’s injuries, make him comfortable, shut the road down, and fly him (White) from the scene.

The family of Troy wanted to show their appreciation for everything first responders and Good Samaritans did that day to save their family members life last Monday. The family met with firefighters and rescue personnel Thursday night at the Reed Fire Department to tell them Thank You and provide them dinner for their monthly business meeting.

“We would like to thank EVERYONE who helped us that day. From random strangers praying, to a registered nurse who jumped into action, the first responders that were there for us in a very difficult time. They were nothing short of AMAZING!!! The officers, firefighters, and ambulance crews, as well as the flight team. I felt we were in the middle of nowhere and the Lord sent us people from everywhere and for that we are truly thankful.“

One bystander told HendersonWatch, a lady who drove up on the accident, just after it happened, got down and prayed together with White, then continued to talk with him and keep him calm until responders arrived on the scene.

“This motorcycle wreck was a bad one with some serious injuries to the rider but that didn’t slow any of our people down. All of the firefighters and rescue personnel knocked it out of the park. The skills and training these volunteers work hard to obtain paid off in a big way at this wreck and made everything smooth and seamless.”

Troy’s family told responders Thursday night that Troy was in stable condition and in good spirits.