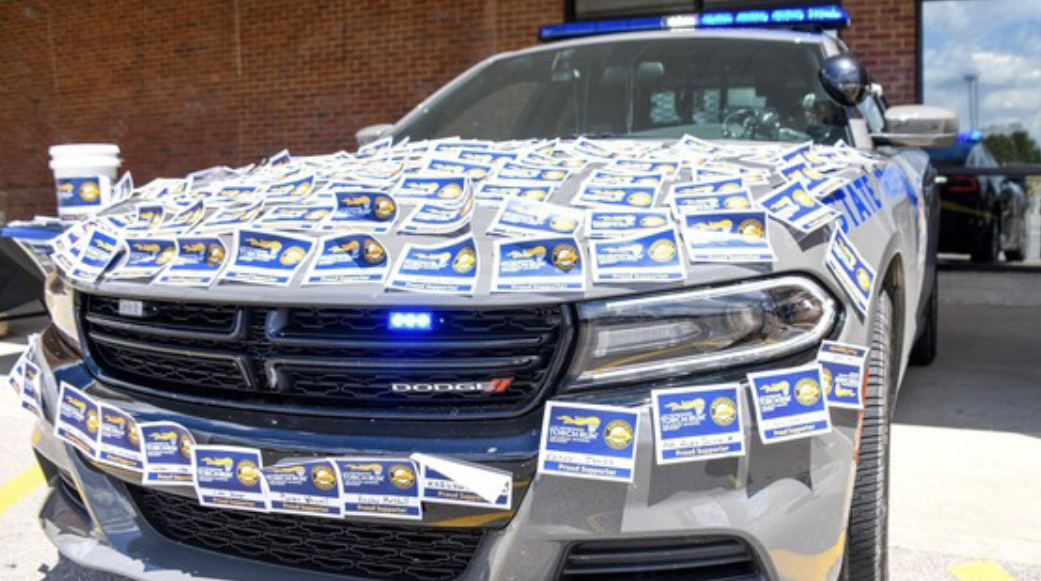 FRANKFORT, Ky. (May 13, 2021) – Kentucky State Police (KSP) once again is showing their support of Special Olympics Kentucky (SOKY) by hosting the ‘Cover the Cruiser’ fundraising event at locations across the commonwealth. Starting Monday, May 17, KSP will park cruisers at a variety of public locations* and encourages Kentuckians to cover the cruisers with custom SOKY stickers for a minimum donation of one dollar, which will go directly to SOKY.

“Special Olympics emulates what Team Kentucky is building each day,” said Gov. Andy Beshear. “It focuses on what we as Kentuckians have in common while accepting our differences in support of building one another up so that we can reach our fullest potential. I commend this fundraising effort by KSP and encourage everyone to stop by the location nearest them and help Cover the Cruiser.”

This fundraising event began in 2020 when the annual Special Olympics Law Enforcement Torch Run was canceled in response to the coronavirus pandemic. The Torch Run relays on foot the Special Olympics Flame of Hope to Madison County to kick off the state summer games.

Earlier this month, SOKY President and CEO Trish Mazzoni announced that the annual summer games will resume in-person this year utilizing a condensed format to allow for proper social distancing and implementations of other safety protocols. The ‘Cover the Cruiser’ event is being held prior to the official start of the annual summer games. This fundraiser concludes on Sunday, May 23.

“We’re excited to continue the Cover the Cruiser partnership with KSP. As they have so many times, they came through in an incredible way for our athletes last year in a time of great uncertainty,” SOKY President and CEO Trish Mazzoni said. “KSP has been a big part of our program for a long time. Their enthusiasm for doing this again this year has been incredible and we’re happy to have the opportunity to work with them.”

KSP raised $16,206 for Special Olympics athletes last year with the highest fundraising honor going to Post 11 located in Laurel County for bringing in $2,577 for SOKY.

“These amazing Kentucky athletes have always held a special place in the hearts of our troopers. So much so, that a friendly fundraising competition among posts has developed,” said KSP Commissioner Phillip Burnett, Jr. “While we appreciate the efforts of our troopers, we would not have this success without the generous support of Kentuckians.”

For more information about the ‘Cover the Cruiser’ campaign or to make a tax deductible donation visit, http://soky.org/coverthecruiser/.

Special Olympics is the world’s largest program of sports training and competition for children and adults with intellectual disabilities. The organization has been serving the needs of our athletes and their families since 1970 and welcomes 11,300 athletes in Kentucky.