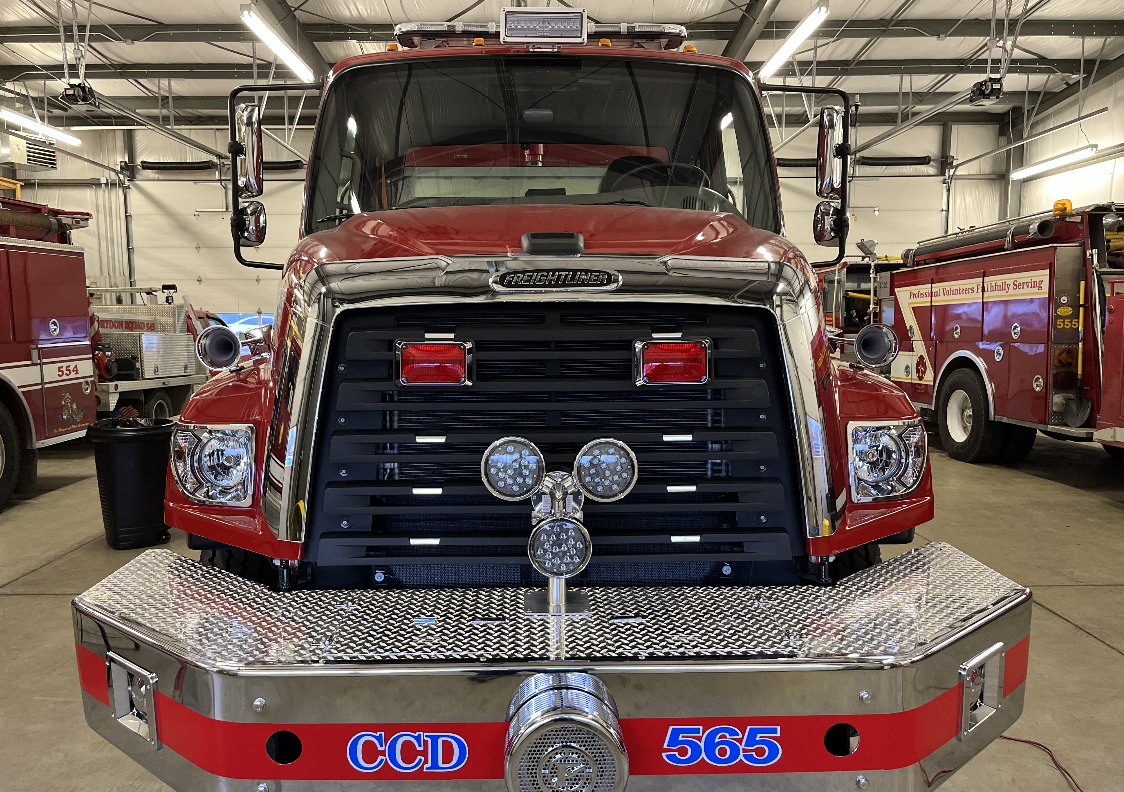 Corydon’s Fire Chief Bryan Coghill originally wrote the grant for this new truck back in 2018 for the FY2019 AFG Grant period. The members of CCD Fire Department learned of the award in August of 2020 which is when they began the planning for constructing the new truck. The goal of the 28 members, who make up the fire department roster, was to get a new NFPA approved tanker which could be used for dual purposes.

According to the Chief, the 2021 Freightliner 114SD was built as a dual purpose truck, as it holds 3000 gallons of water and has a 1250 gpm pump, it is able to perform just as strong as one of the engines. In the case one of their engines went out of service, this truck is able to fill in if needed. Corydon made the purchase through MidAmerican Fire & Safety out of Evansville, Indiana and had it custom built locally by Gerry’s Automotive in St. Phillips, Indiana.

“We tried for seven years applying for the AFG Grant to get a tanker truck, as a volunteer fire department’s budget wouldn’t allow us to make a large purchase outright.”

Chief Coghill says the department used funding saved from fundraisers and donations to pay the 5% match required by the AFG Grant. The total grant was for $315,650 of which $15,030 was the CCD Fire Department match. Due to Covid, Chief says the whole grant process for this truck was about a year and a half long process.

“We are hoping adding this new tanker will help us lower our ISO rating. We are planning a community dedication blessing of the truck very soon. Date and time will be announced. This truck will not only be a benefit to Corydon Civil Defense Fire Department and the community of Corydon, but will also help our surrounding automatic aid fire departments and any outer-lying fire departments in the Henderson City/ County that needs extra water on a fire run.”

The department is using the new Freightliner to replace a 1977 International tanker (2000 gallon tank/ 550 gpm pump) which the department purchased new in 1977. The Freightliner will join Corydon’s fleet which includes 1 brush truck, 2 engines, and 1 UTV.

Chief Coghill noted the truck is not currently in service yet as members are working to stock it with firefighting equipment and receive training on it.

“Grants are very important to volunteer fire departments as we don’t have the appropriate funding needed to keep us up with the ever-changing firefighting technology and guidelines,” says Chief Coghill. “Every VFD in Henderson County pinches its pennies just to make ends meet, major purchases like thisare needed throughout the county but are very rare.”