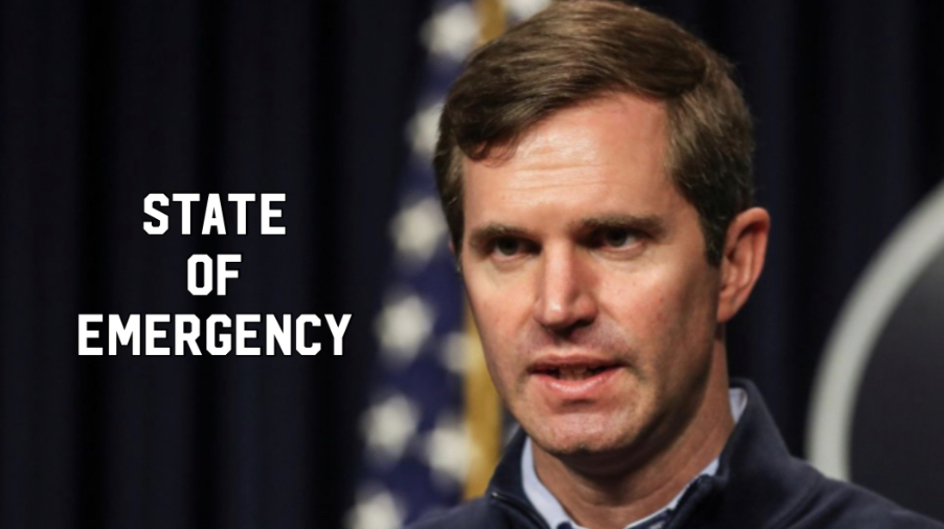 Frankfort, Ky. 1/2/22 – Gov. Andy Beshear has declared a state of emergency in anticipation of a major winter storm expected to hit Kentucky Wednesday night through Friday morning, producing significant amounts of rain, sleet, snow and ice. A winter weather warning is in place across much of the commonwealth.

The powerful winter storm is expected to create difficult travel conditions on major interstates as well as state and local roadways. Tree damage and power outages may occur given the impacts from ice and wind. Snowfall of 1-2 inches is expected in northwestern and Northern Kentucky. The National Weather Service at Louisville issued an ice storm warning for the Jackson Purchase and Pennyrile regions and most of the rest of Kentucky north of the Cumberland Parkway. Ice accumulations are expected to range from 0.25 to 0.75 inches. A Flood Watch has been issued for portions of Central Kentucky from Thursday morning through late Thursday night, as the area is expected to receive 2.5-3.5 inches of rain.

The Governor also issued an executive order to protect Kentuckians from price gouging that can occur during an emergency with goods and services like gasoline, food and household items. This order activates the state laws that prohibit price gouging, and Kentuckians should report it to the Office of the Attorney General at 1-888-432-9257 or ag.ky.gov/pricegouging.

“Freezing roadways are extremely dangerous,” Gov. Beshear said. “I am closing all state office buildings and asking Kentuckians to stay off the roadways if possible, so crews can continue plowing and clearing roads.”

State employees should refer to guidance issued by the Kentucky Personnel Cabinet. If state employees have questions regarding the closure, they should contact their agency’s management or human resources office.

“The approaching storm front is forecast to be one of the most dangerous events in our recent history of record-breaking disasters, due to the possibilities of heavy icing accumulations. Please make every effort to stay off of all local and interstate roadways, as travel will be extremely hazardous and rescue efforts for stranded motorists will severely limit first responder capabilities.”

KYTC, KSP and the Kentucky National Guard are actively preparing for the storm and will be ready to respond. “Working with Kentucky Emergency Management, we have soldiers and airmen on standby to enable a quick and effective response to the commonwealth so that we may help those most in need.”

KYTC Secretary Jim Gray said highway crews are as prepared as they can be: “They will do everything possible to keep roadways passable, but we advise everyone who can do so to stay off the road.”

The storm system began as rain, so roadways can’t be pretreated with brine and rock salt, because it would wash away. The Governor asked Kentuckians, if possible, to avoid travel as hazardous road conditions are expected.

KYTC asked for cooperation and partnership of the public, with four specific requests:

The Governor also urged Kentuckians to follow the U.S. Centers for Disease Control and Prevention guidance on preventing carbon monoxide exposure and safety tips to prepare for and cope with the loss of power. Best practices when using a generator include:

Kentucky Transportation Secretary Jim Gray has also signed an official order temporarily suspending certain restrictions on motor carriers that will be engaged in restoring power, removing debris and delivering fuel to areas expected to be stricken by an approaching winter storm.

“Our Cabinet is ready to help ensure that needed relief will get quickly to areas that lose electric power and experience damage as a result of flooding and ice,” Secretary Gray said.

The order is effective through 12:01 a.m. EST on Feb. 15, 2022. It temporarily relieves commercial drivers from maximum driving times and weigh station stops if providing response to affected areas.

In addition, the order authorizes the Transportation Cabinet’s Department of Vehicle Regulation to waive permit fees for overweight/over-dimensional vehicles. To ensure the safety of the traveling public, carriers must comply with safety requirements and have a copy of the order in the truck cab if operating under the authority of the official order.