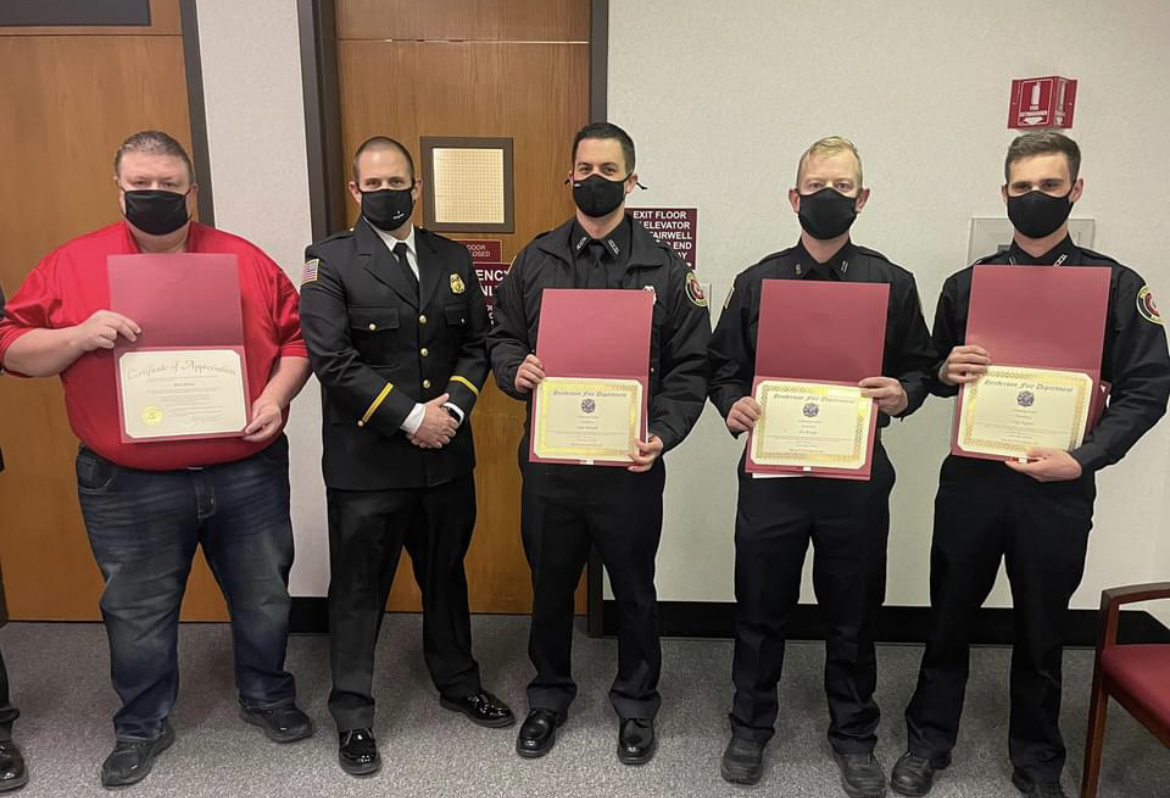 Henderson, KY 1/26/22– The City of Henderson Board of Commissioners recognized three members of the Henderson Fire Department and a communications officer with Henderson 911 Emergency Communications at their regular meeting on Tuesday. These individuals were recognized for their recent response in rescuing a local citizen from a structure fire on January 12th.

Following numerous calls to 911 from passers-by who observed smoke coming from a home, HFD crews arrived to find a fire at a two-story home in the 800 block of Kentucky 2084. They were initially told that it was believed nobody was at home. However, 911 Communications Officer Mark Doepel received a 911 call from a man at the address who said he was trapped in the basement behind a closed door.

While firefighters worked to extinguish the fire, crew members Cory Agnew, Elijah Wright and Isaac Damrath made their way inside to locate and rescue the man who was beginning to be overcome by smoke. Henderson 911 Dispatcher Doepel, who had never received this type of call before in his 17 years as a dispatcher, stayed on the phone with the resident of the home. Doepel instructed the man to find something heavy to bang on the wall or floor so the crew could locate him in the thick smoke. The dispatcher also told him to turn on the flashlight of his mobile phone, and gave him some other fire-survival suggestions.

Officials say the teamwork of the first responders resulted in the rescue of the resident.

“When finding a victim like that, everything has to happen in the exact right order. Everything happened perfectly this night,” Henderson Fire Chief Scott Foreman told the commission, describing the difficulties of locating someone in an unfamiliar, smoked-filled structure and not knowing anything about potential obstacles.

In addition to commending the work of his own employees, Chief Foreman credited Doepel’s role in saving the man’s life, noting that his persistence to get vital and pertinent information assisted fire crews in making this rescue.

“Our guys got to bring the man out,” Foreman said. “But he kept talking with him and gave him hope. He kept him from quitting.”

“Calls of this nature truly reinforce why training is so important, and that we never know what’s going to happen next,” the chief said, adding that it also underscores the importance of  the locations for fire stations in getting the best possible response times.

Foreman said that last year (according to U.S. Fire Administration statistics), 2,266 people lost their lives in structure fires. The national average is 10 rescues per day. The survival rate is 71% if a victim is located in less than six minutes. It drops to 63 % for responses in 6-10 minutes, and keeps going down with everything minute. The response time for the Jan. 12th incident was 3 minutes, 54 seconds, Foreman said.

The date for the next regular meeting is Feb. 8th at 3PM. It will take place in the third-floor Assembly Room of the Henderson Municipal Center. The Board of Commissioners will have a joint work session with the Henderson Water-Sewer Commission at 5PM on Tuesday, Feb. 1st, to talk about major projects and payments in lieu of taxes.